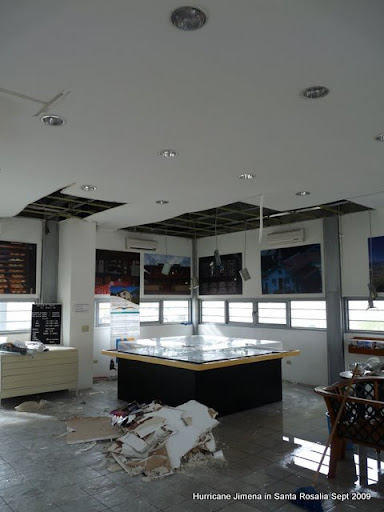 The Sky is Falling
Originally uploaded by svmaitairoa.
In the last hour, we were finally able to settle the children and cats on chairs and tables, small pink, green, and blue islands floating on a one inch sea of rain water. The rain was a stinging horizontal wall outside forcing its way through window sills never designed for more than a light drizzle. To make matters worse, a small leak in the ceiling three stories above us gradually grew to a steady pour of water. Like a tiered alfalfa sprouter, the water accumulated at the top and gradually poured down the sides of the building, collecting in pools on the floor above before running down to the next layer.

Then abruptly, the sky fell on us. The ceiling in the cool room, after soaking up the rain for nearly twelve hours, gave up. Sheets of plaster gave way with a tremendous crash, nearly burying Skylar in sodden chunks of white mud and electrical components. Only a warning pop and her quick movement saved her from serious injury. Abruptly woken from a sound sleep, Aeron was a wreck, crying and almost incoherent. Jaime, Johanna, Steve and I practically catapulted the younger children out of the building and down to the only dry room remaining on the entire property -- the woman’s bathroom. We then returned to quickly gather our gear before the remainder of the ceiling gave way. Food, bedding, clothing, paperwork, and electronics -- all we might have left in the world if the docks give way and which took us hours to move up from the boats the day before -- was moved in less than 10 minutes from the office to the bathrooms. 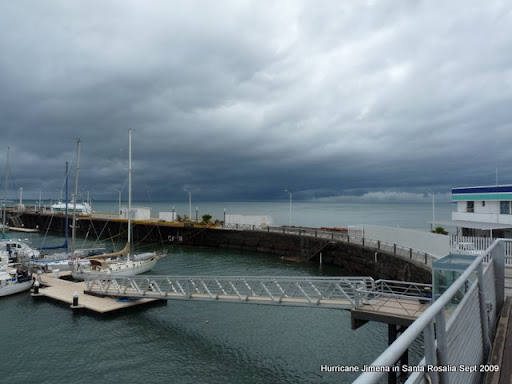 It's Gone, Right?
Originally uploaded by svmaitairoa.
It is only now, after we’ve settled the children in the back room on the floor that we can look around and realize that Jimena is gone. Sometime between our Chicken Little act and provisioning a slumber party in the women’s head, the rain and wind stopped as though some fickle sky god flipped a switch. I’m sitting at the entrance to the ladies room sipping a beer with Steve, Joanna and the dock hands waiting for a forecast. This is probably the eye. We probably have hours more to go. But for however long it lasts, we’ll sit here and listen to the drip drip drip as gravity works its will, nerves humming and twitching with adrenaline and exhaustion.
Posted by Unknown at Friday, September 18, 2009