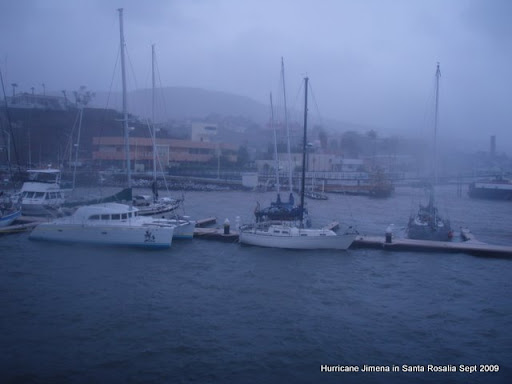 Don Quixote and Lillith Riding Out Jimena
Originally uploaded by svmaitairoa.
Steve can’t move. He’s sitting across from me wet to the bone, numb and blank with exhaustion. The wind and rain are a solid vertical wall slamming the office from the east with relentless, violent force. We don’t know if Festima is going to hold. A large motor yacht has worked partially lose and broken the end of the dock across from Ocean Blue. While the crews managed to literally tie the dock to the piling with industrial sized anchor rode, we don’t know how much longer it will hold.

As Steve slowly sips a cup of soup, the details emerge bit by bit. Most of the leeward fenders on the boats abeam of the storm are nothing more than flat chafe guard leaving the boats to beat against the docks with no protection against damage to both boat and pier. The spray and wind are so fierce, we can’t see the breakwater, we can’t see Festima from the main dock. We only know she is still there because we are still here.

The wind is too strong to walk against, the boat crews have largely disappeared into their boats unable to work outside any longer. The monohulls abeam to the wind are heeled over so far some have their leeward rail in the water. For hours, the crews have replaced lines, added chafe gear and fenders. Lillith cobbled together boogie boards when their full set of fenders smashed. Arturo scrambled from slip to slip tightening every dock cleat, every bolt holding this lego set of a dock together. But now they are done. Even the hardiest and most willing soul is hunkered down in the boat, engines on, waiting for the dock to dissolve or the last lines to part. There is absolutely nothing left to be done.

Steve can not talk about it. He is clearly deeply torn. He wants to be on his boat, but at some point in the last half hour, he reached the wall I hit several hours ago. The boat is important, but the children on shore are more important. I can’t help but wonder how this would have played out for the crew of Don Quixote had DrC been here. Would I have spent more time assisting out in the storm, trading off with my husband the care of our children? Or paradoxically, would I have felt any obligation to be out there, instead maintaining the serene supportive calm of Joanna for the children hour after hour while Dean struggled to save our home. And at what point would DrC have been sitting here in this room with the same haunted look I see on Steve’s face now?

We’re losing our homes. Jimena just won’t go away. Stories I’ve read about hurricanes talk about their ferocity, the noise, the wind and the incredible volume of water. But I’ve never read an account of a storm’s height lasting for more than a few hours. It’s late. I don’t know how late, but the storm has been raging with winds at least in the 50s since late morning. Sometime in the last hour, someone turned the wind dial to 11 ratcheting up the speed exponentially and pegging all the wind indicators. We’ll have to wait till tomorrow to know for sure but I think at least 80, maybe more. It’s late. I’m writing by LED, no power left on the computers. We must be approaching midnight. God damn storm must have stalled right over our heads.

As Steve speaks, I can see Mera and Aeron processing the information. Jaime, little Steve, and Skylar are largely oblivious, but my little ones are so sharp, such intelligent, curious and deeply -aware- creatures that they immediately sensed the difference in him when he came into the room this time. I know they are eavesdropping. DrC and I have never tried to protect the children from the harsh reality of the world by blocking their access to information. When a clear picture began to emerge, they came to me and wrapped their arms around me, shook and unhappy. It is time to do my own damage control and start protecting what I have left. 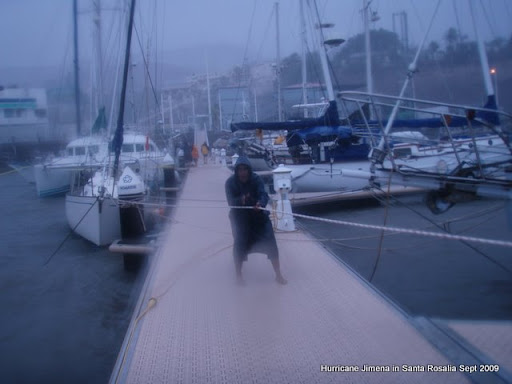 Arturo Resetting Line
Originally uploaded by svmaitairoa.
I’m doing my own hunkering down now. Aeron and Mera and I talk about how boat insurance works. We discuss our plans to go to New Zealand anyway and how that will not change if we lose Don Quixote. In fact, we won’t have to worry about finding someone to maintain or charter the boat now while we are gone exploring another part of the world. Mera wants to know the probabilities: losing Don Quixote, getting a job in New Zealand, salvaging more personal things off the boat if she gets smashed up on shore. Aeron wants to know how to translate the probabilities into terms she can get her head around. After absorbing the possibilities and cuddling with me for awhile, they are now dosing off on their bench island.

We are all here. Everything that is important is in this room. Steve kept Ocean Blue and Don Quixote afloat as long as he could, but the bottom line is that I’m glad he’s not out there any more. We’re done. Grace e deos.
Posted by Unknown at Tuesday, September 15, 2009

I am glad that you are writing this, Toast. It brings it to life. I think it is good to be able to talk about it.
Thanks

Thanks for the update. My heart is just aching for your little ones. I can't imagine how scary all of this has been. But, what a great challenge. Had you stayed in Seattle in your comfy life they would not be the women they will be.

I was thinking of you guys the other day. I was playing with the microscope and realized they last memory I had of you (Toast) was spitting in the the petri dish and trying out that cool new microscope you got).

Santa Rosilia should NEVER be considered a hurricane hole, maybe after reading this people will listen and others will be spared what you guys went through.

thanks for the honest account without the typical cruiser makeup.

My heart skipped a beat when I started reading this - I hadn't even thought about you guys being there. In fact, I didn't even realize there was bad weather in that part of the world - I've been blissfully unaware of the world for a while now. You've done what you can, and let Mother Nature take care of the rest. Sleep now and deal with it tomorrow. God Bless you all.

I dont know what to say, we have been following your journey for a couple years now. We are a family of 5 also, living aboard, planning to cruise.
I can not imagine what you are feeling. As I know your boat is not just your home, it is a part of the family.
Fair winds