Setting Them Again
Originally uploaded by toastfloats.
ji men' a, adj. unpredictable, changeable, likely to change course quickly. EG: A jimena driver just cut in front of me to get to the exit four lanes over!

I hate this storm. I HATE THIS STORM. She’s coming back. The cruisers who listen to Don Anderson and monitor these things just got done listening to the latest updates and checking EEBMike for the weather forecasts. After squatting on top of us for hours, Jimena apparently drifted over to Isla Tiberon, parked again and proceeded to beat the crap out of San Carlos and Guaymas. We are only beginning to hear how bad it was over there. In the meantime, she’s turned around and started heading back over the sea towards us.

The good news is that apparently Jimena has been downgraded. Instead of 90 from the east, we can anticipate 40 to 50 from the north west and south west. There are a lot of reasons why this is a considerable relief, not the least of which is that we won’t face nearly the fetch or swell coming into the harbor, and both the hills and large marina buildings to the west should go a long way towards protecting us. But the forecast is for a great deal mas agua.

I do not understand how this city can withstand any more rain. Frankly, I don’t really know how we’ll stand more rough weather ourselves. Everyone is so tired. The gear is in incredibly bad shape, though I guess we can be thankful that we were all way too tired today to take any of it down. With few exceptions, the fenders are destroyed. All the boats are on their last lines. Another problem we face is that it’s much harder to run off side breakwater lines to the north. During the storm, Ballina nearly pulled out the one piling we had run over to the Navy pier. I’m not sure they are going to be particularly excited about us running another one.

We got the news just as I was serving dinner. Joanna has been doing most of the cooking, while Don Quixote has taken the lion’s share of the hosting. We decided to feed the children and then hustle them back off the boats and into the ladyies’ bathrooms. Of course, the only two tasks I managed to get my poor tired body to accomplish today was to wash the cat laundry and to move everything we owned back on to the boat. Reversing the process just so we can get run over by Jimena a second time adds insult to injury. I resent this storm deeply. 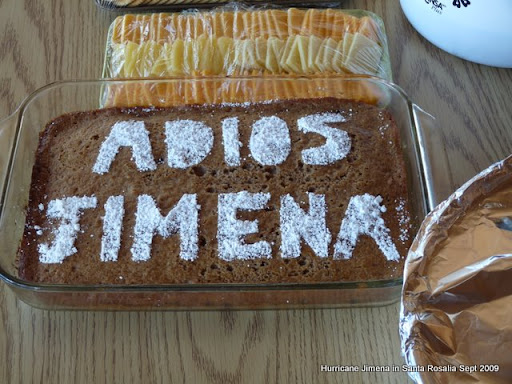 Adios Jimena
Originally uploaded by svmaitairoa.
Squalls have been passing through all evening as the bands of Jimena move over us. However, so far we have not seen winds any greater than 25. The rain is steady, sometimes heavy but mostly a light drizzle. Unless Jimena is still parked in the middle of the sea, we may be done. With all the lines strung on the boats and dock, we could sit through 25 to 30 knots squalls until hell freezes over.

CONTINUED (Friday, 2AM): Stick a Fork in Me

I can’t sleep on the floor of the bathroom any more. There is hard, rock hard, diamond hard, and this bathroom floor. Joanna appears knocked unconscious at the entrance so the kids won’t panic if they wake up and find me gone. I’m taking the cat home. If Jimena decides to throw up another temper tantrum over my head, she better be ready with some serious winds. It’ll take another Cat 2 to wake me up.
Posted by Unknown at Sunday, September 27, 2009

I'm Anne Stephanie Cruz, one of your blog followers. I work for www.ownadaycare.com, it's a site dedicated to giving useful information and advice to people who are passionate about having their own daycare business - but don't know where or how to start.

Anyhow, I sent you this email to ask if you would consider having me write a guest post on your blog. It can just be a short article about child care, parenting and daycare, setting up a daycare center - or really anything that you might find interesting.

Please let me know what you think. Thanks in advance!