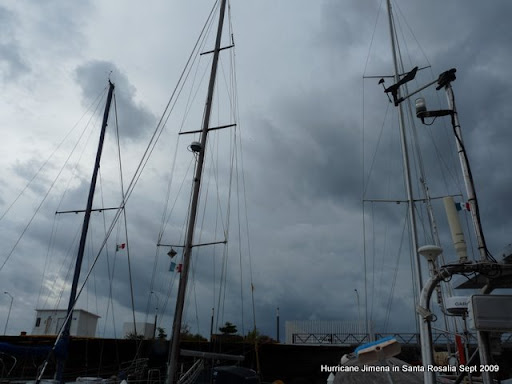 It's Getting Ugly
Originally uploaded by svmaitairoa.
I don’t know when I’ll be able to post this. We just went to the backup generators at the marina and port office. The computer systems and Internet are not on that circuit, naturally. So Internet is down until power comes back. And I can’t go to my boat.

Jimena decided to move directly north, which put Santa Rosalia very much in the path. I’m sitting in the Cool Room with the five children of Don Quixote and Ocean Blue and watching the wind and rain howl. I’d guess the wind speed in the 50’s and we’ve probably seen at least 6 to 10 inches of rain already. The kids have renamed the air conditioned cruiser lounge the Wet Room. The window sills are flooding as is the office above us, and water is pooling on the floor everywhere.

Because our boats are getting the crap beaten out of them. Everyone did the best they could, but now we’re essentially helpless in the face of the weather. The storm surge is blasting against the breakwater in 30 foot splashes for all the world like Mickey Mouse on a sorcerian rampage. The boats are bouncing against their lines, children’s toys in the Santa Rosalia bath tub. Everything is jerking and pounding, the wind is screaming and the rain is a stinging deluge. Imagine standing in a shower on the pound-the-hell-out-of-your-shoulders setting. This is the most water-wasteful shower head in the world which alternates massage and sting pellets with a sporadic high pressure open facet.

Santa Rosalia must be a complete disaster. Even what we can see of Highway 1 is a solid wall of mud and water. Occasionally, an emergency vehicle goes by and it’s a wonder it doesn’t simply float away.

Despite the surging waters, the swirling gale, and the incredible bounciness of the boats, the docks are still there and our boats are still afloat, but I don’t know how long that can last. All the captains and most of the boat crews are on the dock, including the port captain and the harbor master. We have several marina staff as well. All told, there are roughly a dozen people manning the docks, the lines, the chafe. Typical of the team, Steve of Ocean Blue can’t bear to spend more than ten minutes at a time away from the boats.

As a group, our single greatest worry is a boat tied to the fuel dock upwind of the marina. We all thought it was a fine place for them, almost completely sheltered in the lee of the breakwater, until we discovered to our horror after the winds had already begun to pick up that the lines and secure fittings on the boat were limited and inadequate. While there is almost no wind at that spot, surge is rolling past s/v Festima Lente’s bow, raising the boat nearly 8 feet on each rolling wall of water and slamming her against the pier. She has snapped every line originally securing her and most of those we’ve desperately thrown over the remnants.

If that boat goes, it takes out all the breakwater lines set by the south side boats, which include Ocean Blue, Rhumb Line, Lillith and Don Quixote. Even if we cut those lines before Festima Lente yanks us off the docks and on to shore, that leaves us with no off side lines to prevent the large, windy catamarans from beating the dock to pieces. Losing this fuel dock boat is simply not an option. After Festima started snapping lines, the rest of the cruisers took over setting an anchor and getting an extremely heavy duty line wrapped around the masts and dock pilings as well as hanging a tire on the side. The crew of all the boats worked like dogs to get that boat set. They continue to work like dogs monitoring the docks, the decks, lines, chafe, movement. Wet, yellow shadows moving in groups of two, three, five where necessary to make sure none of the boats is lost. 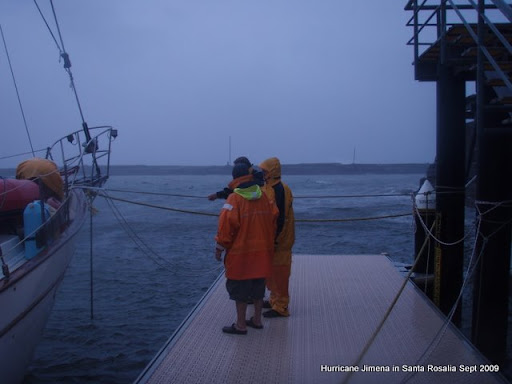 Saving Festima Lente
Originally uploaded by svmaitairoa.
But I’m not one of them. I was. I tried. But now here I am with the children in the safe room. I think I could have stayed out there working, but at some point, I would have needed to have a serious breakdown. I could feel it coming as the wind built and the boat started jerking hard against the lines, bouncing against the dock, twanging the lines holding her to the far pier. I felt the tears starting as I leaned into the spray off the break on my way to the port captain to get line for Festima. However, if I break down, the girls will know. They will see evidence of it on my face, in the redness and puffiness of my eyes. They will know. And what’s holding them together right now is Johanna and I sitting here calmly reading novels.

Every time my breath hitches, terrified at the potential loss of Don Quixote, our cruising lifestyle, and our plans for the future, I remind myself that we matter. These three girls, even this kitty cat by my side. We matter most. I matter more than Don Quixote, and DrC doesn’t want to lose me. So I’m not a heroine today. I’m a mother, I’m scared, and I’m going to sit with my children in relative safety while this hellish wind and rain move slowly past, trusting to the hard, dangerous sacrifice of my fellow cruisers working out there.
Posted by Unknown at Saturday, September 12, 2009

Kudos for your recent posts - we have followed your blog since last winter, when we were also in the Sea of Cortez. Your written pieces get better and better, and we are very moved by your hurricane experiences in Santa Rosalia, a place we enjoyed immensely in calm weather. You've developed a wonderfully wise voice - hope that feedback keeps you writing and posting.
Congratulations,
Catherine and Mac Taylor
s.v. Indigo
svindigo.blogspot.com